I’m disgusted, as you all are, by the news this week. I am proud of my feminist activist friends (Go girls!) using this news story to discuss a topic no one wants to address. But on a deeper level, are you outraged enough? Let’s be honest, the Stanford story is the end result of years of entitlement and bailing out a kid who was ‘special’ and above the rules of society. That is a parenting issue. If we want the disregard for others to stop, we must take back parenting.

Peel back the layers.

Consider this, the rape can not be the first time this young man has been bailed out by his parents. Their language flowed too easily playing down his ‘bad decisions’ and shifting blame. As a community of adults, what we need to recognize is, they are not the first parents to attempt to erase their kid’s actions and consequences. This kind of parenting or lack of parenting is an epidemic.

Smoothing out the impact of a child’s bad behavior so they feel no pain, is a serious issue in parenting that has to be addressed. We’ve seen parents, whose child had broken the school’s athletic code, by getting arrested for underage drinking, go after the school for suspending their child from a team. They even went so far as to sue the school board to remove the policy. They didn’t want their child’s college scholarship impacted. The child signed the school policy contract, and so did the parents, but that didn’t matter in their eyes. We have a similar contract we have read with our kids, discussed the seriousness of, and signed as well. So- my child would have had the consequence enforced, but yours is ‘special’?

We’ve seen school administrations let entire athletic teams off from a 2-week suspension after getting arrested for a house party, saying ‘let’s hop over this one’ because states were around the corner. The team was ‘special’. We’ve asked parents in other communities, who have had several student deaths, to have zero tolerance for drugs and alcohol at graduation so as not to trigger hidden emotions and increase the chance of a repeat. Only to have found out weeks later their community had several parties with ‘the keg flowing’ and ‘copious amounts of alcohol everywhere’, graduates and underclassman, it was a ‘special’ occasion.

I had a teen reach out to me for service hours from You Can NOT Be Replaced after getting arrested for creating thousands of dollars in damage to a property with friends, only to turn down the few hours I offered because ‘I have football’ and was ‘much too busy’. I never to heard from him or his parents again. Did he ever do his hours? Too bad, volunteering with our organization is fun and an opportunity to have a strong mentoring experience with some great people.

A missed opportunity- A lesson in entitlement.

Teens have told us they drink at home, their parents allow it. Parents tell us, ‘they are honor students and work so hard, what the harm in letting them drink?” Have you ever stopped to think the hidden message you are teaching? You know it’s developmentally inappropriate, against the law, tell them don’t get caught, but you allow it, why?

Too often parents think getting angry with their kids, and showing them how disappointed they are when they have done something stupid, is lesson enough. That is not enough to teach what they need to learn. There needs to be an act of reparation with a life lesson. If not they begin to learn…

“I’m above the law, those rules don’t apply to me.”

Until parents are all outraged, it won’t stop. We have to shift focus. Stop this movement within our culture of the ‘special’ kid. Parenting goals have to stop being to raise a kid who gets a full ride to a division one college. It’s too easy to excuse illegal behavior because they ‘work so hard’, ‘getting the scholarship is their job’. We are allowing the ‘whatever they please attitude’, regardless of the wake they leave behind them, as long as they achieve for us.

The goal for parents needs to be character focused.

What kind of adult are you raising?

All parents think their kids are special. My kids are special. All eight of them. I have three who are over 21, highly functioning, bright, funny, compassionate and contributing to their community with their gifts and talents.

Yes, a virtual pat on the back.

That didn’t just happen! It was work!

The sacrifice of our own wants, focusing on cultivating strength of character and being willing to have them hate us for doing what ‘no one else’ ever had to do! Chip and I worked to intentionally form their moral compass, provide outside influences that supported our goals and used incredible tenacity to enforce the consequences to that needed to be imposed when they failed.

The mom who says NO! The one who will not allow drinking, who makes their friends come to the door, look us in the eye and shake our hands. Chip and I call other homes to make sure parents are home (we draw straws, it’s hard to do!). I’m the mom who sent a letter on social media to all my son’s friends when he almost died from binge drinking and I’m the annoying mom who tells you stats of student loss at a cocktail party.

I’m the one who is the kill-joy, the fun-sucker and the buzz-kill (seriously, friends call me that). But I’m old enough that I don’t care what anyone thinks of me. My job is to raise kids that are self-aware, have a developed conscience and empathy towards others, not care what anyone thinks. And I don’t care if the information I share makes you uncomfortable or squirm just a bit. Because I would rather piss you off now, have you make some ‘adjustments’ while hating me a little, than have you call me in tears in the aftermath of a crisis. I’ve met too many parents who are Crushed. 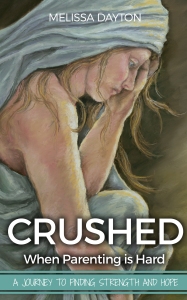 Our job as parents is to raise highly functioning adults.

Our job is not to raise D1 Athletes, Rhode scholars, music or movie stars, and Wall Street billionaires. It is our job to raise good people, who understand that each person is worthy of being treated with a deep level of dignity, integrity, and respect. Our kids need to learn that we treat people that way regardless of whether or not we like them, agree with them or know them. If emotional strength and character are the focus, then regardless of their career path, we have accomplished what we set out to do. We have raised a highly functioning adult.

My kids are leaders, all eight, and have been since they were little.

Other kids follow them. It’s their call in life, and our job to cultivate. I make them all a little nuts reminding them that they are visible, athletic, attractive, artistic and talented and being watched. They are ‘special’. So are yours. But, they are NOT above the code of conduct. They need to understand and appreciate the power of their influence in the lives of others.

It’s our job as parents to show our kids ‘how’ to be a contributing member of our larger community by modeling what it means to be a selfless and responsible adult. All of us have a responsibility to impact others for good, and through the visibility of our gifts, we can do that. Our gifts make us special, but not entitled and above the basic goodness that people are capable of.

What makes me sad is, I have actually had other parents leave the athletic field their kids were playing on to stop and watch one of mine, then proceed to apologize for their kid’s lack of talent. How tragic for their kid, gifts aren’t always visible. My kid’s gifts only give them more responsibility to act with integrity. Not to mention 8 kids is a visible thing, we stick out anyway, gifted or not.

We have worked VERY hard to make sure our kid’s character comes first. There’s no excuse for lazy when it comes to the formation of character. Mediocre has to stop. If we can demand excellence in their athletic and academic life, why can’t we demand it from their character? That means obeying the law too.

That effort to consistently remind them of this responsibility has worked for our family so far, we are often stopped by teachers, store owners, people who have met our children at work or out in the community who have told us that our kids are exceptionally polite and kind. They’ve won leadership and character awards and Emily was even a Coach Wooden Citizen Cup award semi-finalist as a sophomore in college. That award was won by Tim Tebow and Mia Hamm. A happy and proud parent moment.

BUT THAT DID NOT JUST HAPPEN BECAUSE THEY’RE GOOD KIDS,

We have had the call from the school, the letter from the superintendent (oops), the call from the screaming parent, the police station, and a hospital visit that ended in a miracle. We’ve had semesters home for bad grades and even had to kick out a kid for spending so much money on clothes that he was getting hand written notes from the sales people. We did that because that money was supposed to be paying off students loans. Integrity and keeping one’s word is an essential successful adult character trait. He had to learn the lesson before that bad pattern was cemented in him.

As parents, those failures are hard to watch, hard to discipline and hard to follow through with consequences. We wanted so much to make the uncomfortable situations go away, and it was a pain in the tail to have to enforce those consequences. We had to suffer too. But it was our responsibility to do so and raise kids that were aware that their choices impacted others. They needed to learn through the smaller situations so that they didn’t continue with the bad behavior into adulthood. We all know undisciplined adults, that just doesn’t happen either, that takes years to form.

They need to fail while still in our home to learn:

So are you outraged? Are you pissed at me? That’s ok.

Harness that emotion and stop. Reevaluate. Set goals, goals for you as parents, for your kids and for your family that are established to create core values. Continually evaluate how you’re doing. If you are unsure of how to strengthen your family, look for an outside support system to help you. Take the steps to find a community of adults who will support you in the character development of your child, so that one day you can look at your adult children and be proud of not just the job they have, but the people they are.

One thought on “Stanford”